Boom! That is how I like to start my units. It is usually all fun and games until I have to introduce the statement of inquiry. I have been exploring different strategies to do this in the hopes that the students will fully engage with it right from the start.

For this unit, I printed the statement of inquiry in large font. I cut out every word and shuffled all the pieces. I divided the class in groups of 3-4 students each. The groups received a set with all the pieces and the instruction was to come up with a sentence that would make sense to them. 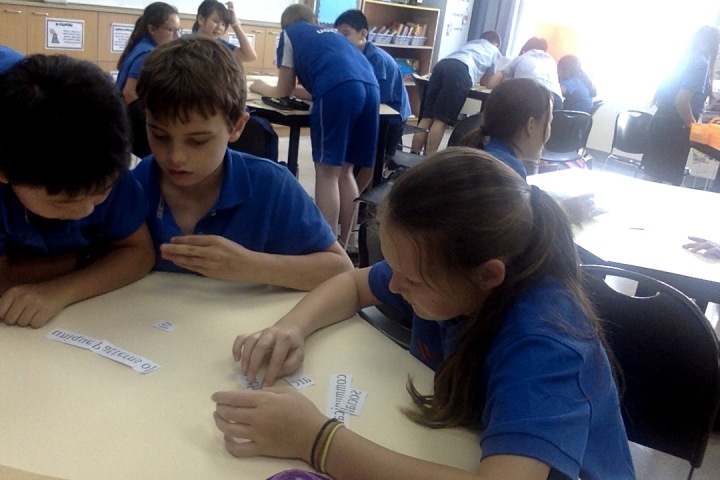 At first, the students cautiously studied the words and slowly started joining them together in their first attempts to make a statement with them. The slow start was making me have second thoughts about this activity as I walked around the classroom. Luckily the pace picked up after a few minutes and this is when the magic happened!

It was very interesting to hear the discussions that took place while the groups were trying to figure out their statement. I liked how, within a group, different students came up with their own version of the statement and were fiercely advocating for their version, passionately explaining its meaning and how it made the most sense. I was in awe of how much the students invested themselves in this activity and how it really gave the students the opportunity to tackle the statement of inquiry and to make meaning of it. Goal achieved!

Once the groups have settled on one statement, they shared them with the class and surprisingly, for the most part, the groups came up with the statement of inquiry as it was written for this unit.  Once the different groups explained what they thought it meant, mostly by giving examples, we moved on to the Key and Related Concepts.  For this, I wrote them on the board, and asked the groups if they could see these concepts in the statement.  As they were all explicitly included, this was a very simple task for them to accomplish.  I just wanted them to be aware of how they are connected and to make sure that they all understood what they meant.

If you are wondering what the statement of inquiry was, here it is:

Statement of inquiry: Patterns of social communication are unique to each culture.

2 thoughts on “Introducing the Statement of Inquiry”